My goal to keep up with weekly blogs has not been fulfilled since Cameron was born. It seems like ages since he was born and it’s been only 2 months. We’ve only been just the 4 of us for two weeks now. My parents, Jeff’s parents and friends have come to stay with us.   Both sets of parents were incredibly helpful with entertaining and giving attention to Jacob, meal prep and clean up, and household chores (laundry, garbage, cleaning) that we didn’t have enough hands/hours to do.

Now we’ve been on our own for almost 2 weeks and the house is a hot mess. That may be our new norm. Dishes are done at the end of the day, meals are whatever is fastest and easiest, laundry piles up until we need burp cloths and blankets. Thankfully, Jacob is entertained MWF morning at schools. I’m trying to find things for him to do the other days.

Jacob is on his way to becoming a three-nager. He had a few serious tantrums/meltdowns and acts of defiance this past year (Mammoth Village when he wanted me to buy a carton of coconut water when I had already bought/he drank from a bottle is the one that sticks out in my mind). Most recently, he decided to spill all the Goldfish onto the couch cushion and when I asked him to put them back into their bag, he proceeded to crush the Goldfish, scatter them everywhere and laughed as he ran away from me.

Because I was nursing Cameron, I was helpless to do anything other than talk in a stern voice and try to give him my stink eye. Neither worked and I was increasingly becoming impatient. I put Cameron down, brought him to the couch and tried to get him to pick the Goldfish up. He protested, cried, screamed and I raised my voice. Nothing was working nor did I think to consult my brain for the notes I had written from How to Talk so Little Kids Will Listen

were far from my mind.

While this is going on, my mind and emotions are all over the place. I’m frustrated that Jacob is not listening, I’m annoyed that there is a big mess of Goldfish, I’m wondering how I’m going to teach Jacob to respect food and take responsibility for making a mess, I’m fast forwarding to his three-nage years and wondering how I’m going to handle more frequent/worse tantrums, and I’m mad at myself and feel guilty that I’m upset and raising my voice at him.

There is life-long reflection and learning to parenting. Will there ever be a day where I don’t feel guilty or lacking in some kind? I’m not sure. I would like to be a gentle, patient parent who focuses on the positive and is able to redirect with humor or distraction. That doesn’t happen easily especially in the heat of the moment. Next time, I must be mindful of these emotions and try harder to be calm and positive.

Later on when both parties were calmer, I had a conversation with Jacob to try to relay to him the importance of respecting food (e.g., Goldfish is food for eating) and cleaning up if we making a mess. He seemed to understand and we haven’t had any further Goldfish incidents since then.

Jacob is being himself: a toddler- learning so much and quickly, wanting to have fun outside and doing everything he wants to do (eat candy, watch TV). I mean, who doesn’t want to do all those things all day long?

Ice cream will get him to stay seated 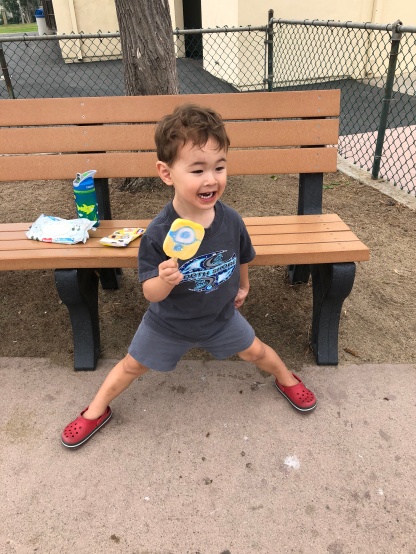 So much for that theory!

I need a refresher course on how to talk to toddlers so they will listen. I have a few other books in my library that I haven’t read yet – No Drama Discipline and The Whole Brain Child.  I’ll add reading and praying to my daily To Do list.

Stay tuned for future blogs about preparing to return to work, picking a nanny and dealing with diaper rash.  Cameron is 2 months old now and is eating and growing like a champ.   Until then, I hope everyone has a fun and cute Halloween! This weekend’s task is to get Jacob a costume! He refuses everything!

Jacob helping carve a pumpkin. My 2nd pumpkin ever! 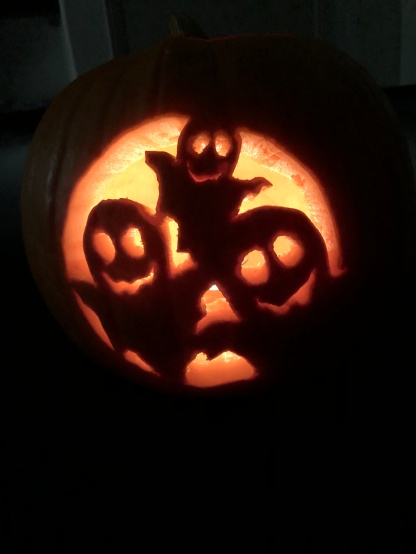 What funny stories or advice do you have about the terrible twos and threenager tantrums?