I survived the first 30 days of the newborn period. Cameron is about 5 weeks old and we’ve had both sets of grandparents here for over a week each. It’s been a little bit of an adjustment which is one of the reasons I haven’t been able to write.

And this morning, as I dropped off Jacob at preschool and went for a short walk, I said I was going to catch up on my blog. As I write, it’s 11:21 and I have to leave in 20 minutes to go pick him up. Where does the time go? Well, the first hour was spent going on a leisurely stroll through town. Then the next 30-45 minutes of the 3 hours I have was spent nursing Cameron and then talking on the phone with Anthem Blue Cross.

I have been trying to get reimbursed from Anthem for the Willow breast pump since its original purchase date of 7/12/18. It’s not 10/1/18 and I have been submitting claims and appeals since then via email and snail mail as well. Insurance… it has its good and bad days, doesn’t it? The Willow breast pump is a new electric breast pump that enables a mom to pump wire-free. It tucks right into your bra and collects the milk into a bag within the system. It sounds great, doesn’t it? In theory, yes. I haven’t been able to exactly get the hang of it yet so so far it’s been a pain (literally and figuratively) on my lactating breasts and trying to get some reimbursement from insurance.

My in-laws left this Monday morning after a 1.5 week stay with us. I love them- they’re super nice and great with Jacob. They try to help however they can with meal preparation and/or clean up, changing diapers, household things like laundry, etc. They’re inherently kind and generous people and very low-maintenance. They did, for the first time ever, make me appreciate my parents and my upbringing. For instance, my parents are not very chatty people. My in-laws are very chatty and like to ask a lot of questions because they’re naturally curious.

There are some things that all grandparents/family seem to have in common. When the baby is crying, grandparents like to sing the baby’s name repeatedly and increasing in volume in hopes that the baby will stop crying. Sometimes they’ll even clap and make funny noises at the baby. They also like to come very close to you when you are holding the baby. It’s kind of surprising when you realize that someone has sidled up to you. I thought it was just my parents who did that. Nope, it seems to be a common theme (though my n=2 sample size may be small).

Our new routine.. is not yet having a routine. With our 4-bedroom temporary housing situation, we have the space for the in-laws to stay with us. Which saves us a ton of money since we usually foot the hotel bill. It does mean that I get the master bedroom and Jeff sleeps in an air mattress in the 4th bedroom downstairs. Cameron is adjusting to sleeping in the bassinet at night.

Health-wise, he is growing like a champ. Thanks to his tongue-clipping he is eating like a champ and so efficiently (<10 minutes per side). Our current concern is his jaundice. Before our hospital departure, his jaundice levels were normal. Then with the incoming of breastmilk, he developed some jaundice and we noticed the whites of his eyes were slightly yellow and the pediatrician noticed some jaundice on his torso. Other than the whites of his eyes, Jeff and I didn’t notice the jaundice since we figured, he’s half-Korean.

The recommended treatment for this current level was 24 hours of formula and await symptom improvement for a week. During that 24 hours, I was to pump milk. If this was the first baby, I would’ve felt like a total failure in giving the baby formula. With Baby #2, I did not feel as guilty- not totally guilt-free but felt less bad because this was a medical treatment. And I also thought, great! I can try out this Willow pump and start a little bit of storage! Double bonus!

I have to admit, *Cameron could go 4-5 hours without needing to be fed and he was sleeping like a champ! I was pumping every 3-4 hours with my old Medela Pump in Style Advanced. This would’ve been a great time to practice with the Willow pump but that’s a story for a different day.

That night, Cameron ate 3-4 oz. at 8:30pm and went to bed. I went to bed after preparing my pump parts and a few bottles of formula. The next thing I know, it’s 2:30 am, my breasts are huge and feel like rocks but Cameron is still fast asleep without a peep. Usually he’s grunting and trying to kick out of his swaddle! I pumped and got ~3 oz/breast which made me super happy! (On average, you produce about 1 oz/hour and I never became nor would I want to be a superproducer.)   Other than trying to find some quiet time to pump (in-laws were with us) with Jacob running around in circles so I had to lock the bedroom door, the next annoying thing was cleaning the bottles and pump parts.

Twenty four hours went by quickly and thankfully we were back to breastfeeding.   I’ve never been so happy to breastfeed again! Pumping is a pain! My nipples felt like 5 layers of skin had been ripped off and they HURT!   I thought my nipples were used to pumping after my time from Jacob. That doesn’t seem to be the case. How am I going to keep up with pumping when I’m back at work? Hmm…

Now we have to wait a week and see if his jaundice/scleral icterus improves.

My in-laws left, we had a few days of me being sola with the kids and now my parents are here. Jeff is going on a diving trip to Mexico for a few days so it’d be nice to have some help and also for my parents to spend more time with the grandkids.

Jacob has been loving the attention from the grandparents. He’s been getting better with the school dropoff transition. He is such a fun and happy toddler. He has a fierce independence and spirit. I love looking at his baby pictures and comparing his and Cameron’s age. Poor guy, it’s hard to do everything he wants to do. First it was when I was pregnant and I couldn’t walk/carry/do much with him. Now, it’s hard to do stuff because of having to feed Cameron. As Cameron gets older and his eating spaces out, we’ll be able to do more things.

Stay tuned for more tales from the life of a hotmess mom of 2.

What fun grandparent stories do you have? Any advice for how to manage 2 boys? 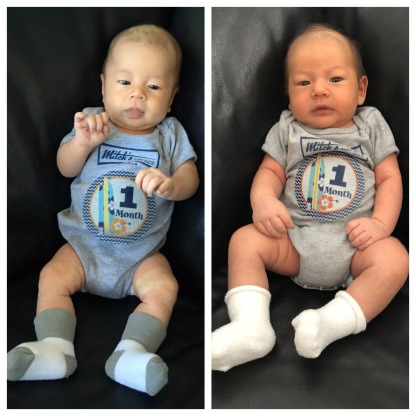 *I finished this blog on 2.5 days on Thursday night.